I found a butcher in Brisbane with a range of cuts of goat meat, so I bought a couple of shanks. I have eaten goat several times before but even though it is apparently the most widely eaten meat in the world, it is extremely difficult to buy on the Sunshine Coast. We recently purchased a slow cooker, so that seemed like the ideal way to cook goat. I found a recipe in a slow cooker book for lamb shanks, so I modified to fit with the ingredients I had available. I combined 1 tablespoon of olive oil, 1 teaspoon of ground cumin seeds, half a teaspoon of dried red peppers, a finely chopped jalapeno (without the seeds) and half dozen chopped fresh oregano leaves. I used this as a marinade on the shanks for about half an hour. 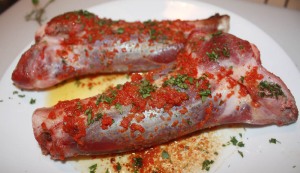 I then cooked the shanks in a pan until brown, and then transferred them to the slow cooker with a small amount of water and 3 small tomatoes coarsely chopped. I cooked them on low for 8 hours and then served them with extra oregan leaves and mashed potato. 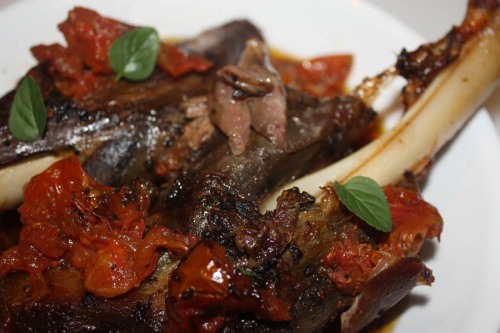 The shanks could possibly have done with a little less time in the slow cooker, but they didn’t dry out, and the taste…..

I can really only describe it as an explosion of flavour in my mouth. This was an amazing meal. The meat was deliciously tender and moist, stronger in flavour than lamb shanks and without the fattiness, and really well balanced, I loved it. Looks like there’s another trip to Brisbane to get more goat meat coming up.