Ever since I tried balut, I have intended trying salted duck eggs. So this week when I was pedalling by an Asian Grocery store here on the Sunshine Coast, I stopped, and fortunately they had a few in stock. They are mainly a Chinese dish apparently, but the eggs I bought were bright pink, which is from a dye they use in the Philippines to distinguish between salted and plain duck eggs. The eggs were already cooked, so it was just a case of removing the shells and eating. 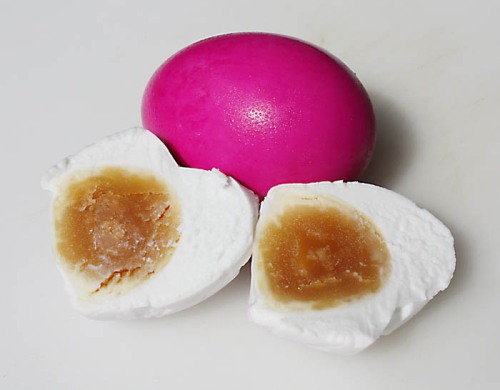 As you can see from the photo, they look a bit different to ordinary cooked eggs. The egg white is a bit denser than normal, quite a pleasant texture, but very, very salty. The yolk has a quite a hard lump in the centre, but overall is creamier and heavier than a boiled yolk. It’s a bit salty, but not as bad as the white. It has just a hint of duck flavour, which I didn’t expect, but which I found delicious. I think overall these eggs are too salty to be eaten on their own like I did, but mixed with something that needs saltiness, maybe chopped up on a salad, they would be really good. I’ll have to do some research into recipes using these eggs.

This entry was posted in poultry and tagged cooking, duck, eggs, food, poultry. Bookmark the permalink.